Diversity and inclusion consultant Doug Harris, CEO of The Kaleidoscope Group, started in the business when “the diversity leader sat in the basement in the corner next to the janitor."

In the 30 years since, firms like his have multiplied into the hundreds, and some companies have hired chief diversity officers to show their commitment to addressing inequities. Harris has seen the purpose of the work evolve from compliance with anti-discrimination laws to creating cultures of inclusion and equity. 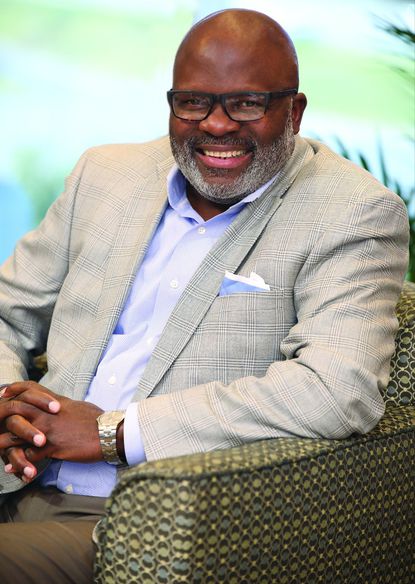 His phone has been “ringing off the hook” as companies seek advice on how to have a fruitful dialogue with employees in the aftermath of George Floyd’s death. It’s not the first time outrage over racial injustice has caused demand for his services to spike. But this time feels different.

With most activities halted because of the pandemic, more people are paying attention, he said. The anger has crossed oceans as people across the globe take up the cause.

With frustrations at a boiling point, Harris hopes to push a new message: unity.

The interview is edited for length and clarity.

Q: How can companies respond in a way that isn’t just lip service?

A: We look out in the world and see this unjust behavior taking place. So what is the unjust behavior that is underneath the roof of my company? Am I hiring, am I promoting people? Do I have fairness and equity for all backgrounds within my company?

Two things have to happen. Companies have to make the commitment at the level they control. And those that want something to happen have to be more strategic in what they expect.

Q: How do companies that have had their own issues with racism address these issues without seeming hypocritical?

A: Sometimes a nonhypocritical answer is to say, These are very harmful issues that are taking place in our society and we have had these concerns within the walls of my company. It gets harder when you’ve had mistakes, but many times those (companies) are the ones that really commit because they know they have to go the extra mile to make a difference because they’ve already screwed something up.

Q: What are the actions that companies must take?

A: I think one of the biggest actions is to totally understand the inequities in their company. Then put in place plans to address those inequities. And then go to the next level of how do we play a role in addressing that in the broader world. That role should hopefully have some value to your company.

I think the other thing that has to happen is that you have to have diverse groups come up with these answers. I have had so many clients get together their leadership team that says what should we do. And there’s nobody different on that team. And then they get mad when nobody likes the answer they came up with.

Q: In your 30 years of doing this, where have you seen the needle move the most?

A: When I started it was hard to find anyone other than a white male leading any organization. There’s been great movement around diversity in leadership, different voices coming to the table, different breadth of employees in organizations, different relationships with a diverse community, focused efforts toward a diverse market.

I guess what makes it challenging is when scenarios like George Floyd take place it’s so easy to say nothing has changed. And I’ve seen a ton of change. So how do you deal with these two realities? My work is twofold. One is to let those who are making the changes know there is more to be done. And I also have to ease some of this anger from people who say nothing has changed.

Q: Can you talk about your focus on unity?

A: My 30 years in this work has been how can I help the historically excluded. But the future work is going to be how can we build something together that is going to be good for all. We are better when we unite all of these concerns and all of our opportunities and everyone brings their best to the table for the achievement of the organization.

Q: Do you get a lot of pushback to that approach?

A: I get pushback from those that are really mad and they call my approach soft. That mindset of attacking your enemy is so prevalent today that my message of unity feels almost like it’s (particularly important).

Q: What can employees do if they feel company leadership isn’t doing enough?

A: It’s hard to get strategic when there’s anger in place. You have to talk about why this is good for the organization. Some people call that kind of discussion a sellout discussion, but it is really a discussion that leads towards movement.

Q: What about calling out a company on social media to hold them accountable?

A: I don’t believe in calling people out publicly. There is a big audience that does. I do believe in protest, which is about getting people to pay attention. But once they pay attention, now let’s work together to come up with a solution versus we’re going to stay on the attack side of things. Revenge is a bad objective, change is the real objective.

Q: When there have been inflection points in the past, have they resulted in sustained change?

A: Starbucks had a great initial response (to outrage over a store manager calling police on two black men waiting for a friend at a Philadelphia store in 2018), but they also followed that up with what else should we be doing. These are many times great ignitors of long-term change. But I have also seen people, once the noise stopped, go right back to what they used to do.

Q: Are there any companies you point to as being really good at this?

A: I think there are people who do parts of it well versus doing it all well. I’m not one to hand out trophies right now, simply based on the fact that these issues are deep. One of my clients that did well externally had a poor reputation of promoting people internally. Great relationships, great support for the community, but wasn’t doing anything internally.

Q: What is the biggest challenge companies face when it comes to race and diversity issues?

A: I think there still is this discomfort and fear around difference that makes people stay in their comfort zones. One of the (challenges) we talk in our work is that you can be different, but I only want the different people who are just like me. We really don’t want the real different person who probably adds the real value to my company but is the one who I have less comfort with.